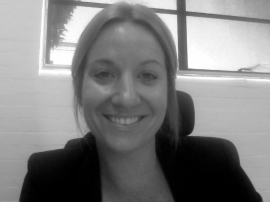 Works at: CEO, The Monthly

My first job was at 13 years of age working Saturday’s and Sunday’s at the Donvale Craft cottage. It was so exciting to me at the time, Guy Pearce was a regular and my first celebrity crush.

What’s the hardest challenge you’ve had to face work-wise?

Initially explaining what The Monthly was (and how often it was published!!!) to media buyers, nationally.

The Monthly’s in-depth essays have a great impact on society, highlighting the issue to a readership of the publication. Has there been a situation that demonstrates this most to you?

What’s your favourite part of the job?

Working with a great group of passionate, dedicated people producing an independent publication that makes a valuable contribution to Australia’s cultural landscape.

If there was one issue or idea you would like discussed more, what would it be?

I’m a firm believer in waxing but there still needs to be a greater understanding and adjustment of cultural attitudes towards women in this country.

As the year draws to a close, what in your opinion are the three most significant issues of 2011?

For me, a holiday is what’s next on my agenda!