This week, Kate interviews one of Melbourne’s startup heroes  – Alan Downie, the CEO and cofounder at BugHerd and community organiser at HeadStart Australia.

BugHerd is one of Melbourne’s recent startup success stories, why do bugs need herding and what does your product do?:

Bugs need herding because when you’re building a website or web application, everyone has an opinion about it!

You may have a client that wants a different version of their logo, a project manager that doesn’t like the sign-up process, a bunch of testers finding glitches, a dev team managing their own internal issues… not to mention that end users of the web app will always find something new to break. If your team is using a traditional bug tracker, all of these issues have to get collated from emails, phone calls, Zendesk or maybe UserVoice and put into a bug tracker for the dev team to resolve. Then when the issue is fixed you have to get back to whoever reported it (usually the same way they contacted you in the first place) to let them know it’s done! So the end result is that you have a 15 minute conversation across three or four different people just to log an issue that may only take a few minutes to fix.

The reality is that when you’re building a web app, everyone who ever looks at the website is a source of bug reports; so we figured what better place to put your bug tracker! We bypass all the complexity of JIRA or FogBugz, and just get clients, end-users and your team to make annotations directly on your website. We collect that feedback, along with a bunch of meta data like who they are, what browser they use using, what the url was and we can even grab a screenshot of exactly what they saw. It means that we provide a ton of context around an issue even when the user only gives us a few words of their own. We bundle all that up and put it in front of the developer in a way that makes it easy for them to find, replicate and fix.

How did you find raising money for BugHerd both globally and locally?

I’ve never been much of a networker, so incubators like Startmate and 500 Startups were crucial for us to find investors.

Every one of our investors either attended a pitch event or were introduced to us through Startmate or 500. That’s not to say you can’t do it yourself, it’s just a matter of finding who you want money from, and then finding someone who might know someone who can get an email address or tee up a meeting. Today you have things like Angel List, which can facilitate that for you, so that really breaks down the barrier to finding that right person.

It doesn’t matter if you raise locally or in the US. The important thing is that you locate your business in the city or country that gives you the best chance of success. That’s step one – forget about where to raise from. If you want to work with retail companies, you go to the US. If you want to do something with mining companies, then you get on plane to Perth! If you’re doing a SaaS product and don’t plan on having a sales team then it really doesn’t matter where you’re based in the early days. Once you work out where your business needs to be, then that’s when you work out where to raise money form. We decided Australia was where we wanted to run our business, so we focused our energies on raising here. The best value you can get from your investors is their experience, so we wanted to be where they are.

You recently started HeadStart Monthly – what’s the purpose of this event and how important is it to give back to our tech community?

In the US, and in the Valley in particular, IT folks are born wanting to start a business. In Australia we still very much have the mentality of “get a good degree, get a good desk job”. Nice and safe. People love to complain about how risk averse investors are in Australia, but the reality is that it starts with students and employees not taking the risk themselves first. The average Aussie would rather have a house and mortgage than to run their own business.

We’ve been meeting a lot of people who are clever, passionate and have awesome ideas, but they’ve just got no idea what they’re doing (to put it bluntly). We looked at these teams and realised that the only difference between them and us was that we’d done Startmate and had 18 months of running a funded startup under our belt. The difference in knowledge objectively isn’t that great, but the gap is vast in terms of how much you can achieve once you have that knowledge. When you getting started you have a feeling that you’re just missing some small piece of the puzzle, that there must be something the other guy knows that you don’t; and it’s true. The crazy thing is that those things are massive hurdles for a startup and yet are actually really, really easy to learn. Business validation, customer acquisition and application metrics are all dead simple concepts to learn, but as a beginner you don’t even know that you need to know them. In short, we just got tired of seeing people pour 6-12 months of their lives into an idea without having ever spoken to a customer. It’s a *heddesk* moment for us now, but 18 months ago we were doing exactly the same thing!

The more we can help these pre-businesses become real businesses, the greater the success rate will be and that will in turn make startups more enticing to investors, and then the whole wheel starts to turn.

You work out of a new coworking space in Abbotsford called House of Commons. What do you think of coworking as a movement and what do you like about it?

Amusingly, I used to hate coworking. There are still some things that bug me about it (I still hate open plan offices!), but I’ve definitely come around to the idea.

As an early stage startup, a coworking space can act a bit like an incubator. You’re surrounded by people who can challenge your plans and be a sounding board for your thoughts and ideas. For me, the biggest danger to a startup is working in isolation. When you work by yourself there’s no one over your shoulder asking you, “have you launched yet?”. House of Commons is a bit smaller than some of the other spaces around, so the noise isn’t a huge issue. We’re all very open with our businesses and help each other out whenever possible.

[Ed’s note: check out our coworking directory here to discover a space near you.]

I didn’t do IT at school or university (initially at least); having always had a computer at home, computers were more like a toy for me than something I’d do as a career. I built my first website in 1995 in my first year of uni, but didn’t take it up as a career until four years later.

Bizarrely I didn’t think of the Internet as anything other than a research tool and a means to play multiplayer Quake.

After nearly dying of boredom doing Science/Engineering, I quit uni and did everything else from fixing computers to selling used cars. After spending a year or so installing internet in people’s homes, I decided I’d rather be on the other end of the modem, so I went back to uni to do Multimedia.

I actually owe a lot to a big bloke by the name of Brad ‘Hubba’ Houghton. He gave me my first web gig at Triple M/Fox FM in Melbourne when I was only six months into my degree. He had no reason to hire me other than a gut feeling (he had a lot of gut to have a feeling in, mind you).

I lived in South Melbourne for a few years, and loved it. At the time I didn’t really take advantage of the awesome food and coffee in the area, and now that I’m out in the ‘burbs I always wish I was back.

Early morning coffee from St. Ali, French toast down the road at Gas and the famous South Melbourne Market dim sims for lunch. What else could you ask for!

What other events or sites do you check for your source of startup news and happenings?

Most of my news comes from Hacker News or Reddit, although I try to keep tabs on the local industry as much as possible via Fairfax, Startupsmart and Delimeter. There have been a couple of other local startup focused publications, but none of them have quite nailed it yet. I’m at Silicon Beach drinks occasionally, and obviously always at HeadStart!

BugHerd is taking up most of my time at the moment. Matt (my cofounder) and I still have FiveSecondTest running on the side which we may get back to one day. I’m running the HeadStart event along with Vincent Brendel (2nd Thursday of every month), and in the next few weeks Matt and I will be starting a tech-centric podcast which should be a heap of fun. 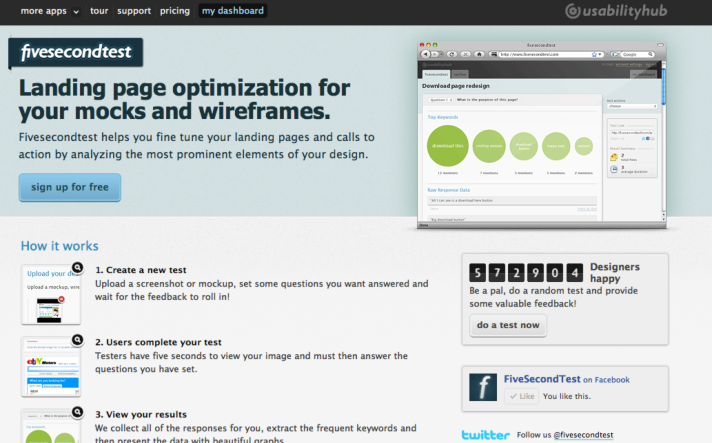 Stay tuned for more interviews here and via our go-to email digests @ http://thefetch.com