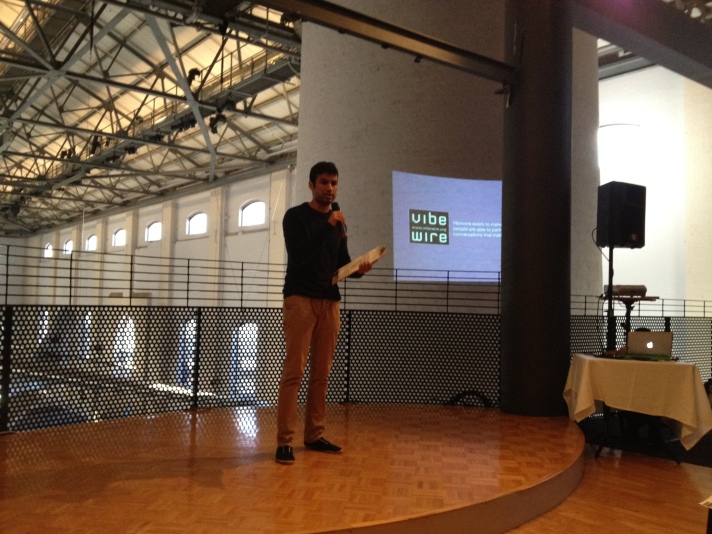 On the last Friday of every month, Vibewire hosts a breakfast where five speakers are given five minutes each to inspire us. Fleur Fletcher went along this month to hear what they had to say about ‘Lies’.

Nestled deep within the Powerhouse Museum, fastBREAK is a monthly breakfast which aims to “nourish your creative mind.”  It’s proving to be a popular event and I arrived at 7:45am to find the room pretty much full. Everyone was busy tucking into their Black Star Pastry quiche, danishes and sausage rolls… seriously good.

The topic for the July speakers was Lies, and first up was Simon Cant, an innovation consultant . He told us about the lies that large, or traditional, organisations tell themselves when they are faced with a new (digital) challenger. For example, when Wikipedia arrived on the scene, Encyclopaedia Britannica justified their ‘no action’ by telling the lie, “It [Wikipedia] will never become mainstream. The quality is terrible.” And we all know what happened next.

Cant finishes with a quote from Kung Fu Panda:

“My friend, the panda will never fulfill his destiny, nor you yours until you let go of the illusion of control.”

His final message being; To innovate and succeed in a digital world, large traditional organisations will need to give up some of their controlling ways.

Next was Hannah Law, Head of Social Media at Switched On Media, who spoke of the little white lies that are told every day, such as that concession card you shouldn’t have bought. While acknowledging that lying isn’t ideal, Law explains people tell these small fibs to make the truth just that little bit shiner, to help pass the day with a little less friction.

Third to the stage was magician Jack ‘Hiltini’ Hilton who wowed the audience by practising a little mind reading. An audience member was picked from the crowd, and after a series of questions, Hilton was able to name her perfect date, and the name of her partner. We ran out of time to find out how he actually pulled off this neat trick!

While Hilton entertains with lies, the next speaker Tim Burrowes has become a reluctant master to help cover his inability to remember faces. Living with a a condition, known as prosopagnosia, Burrowes struggles remember faces. He shared stories from awkward work encounters to not remembering old girlfriends, Burrowes learned to lie to escape embarrassment;

“I’ll always use the words ‘good to see you’ just in case I haven met them before.”

Our last speaker was Dev Singh, the founder of Sketchpad Ideas. Singh shared the very personal story of how a life threatening illness changed his perspective on life. Once over the worst, Singh looked at his life and realised he’d been living a lie. He quit his medical degree, and decided to shape his own path instead of doing what was expected of him. He mentions three lies that we should all avoid.

Lie: Things will work out for me: Optimism makes you wait for things to happen to you.
Truth: If you want something to happen, you need to do it yourself.

Lie: I don’t care about money
Truth: There’s a disassociation between money and good which doesn’t have to be the case. You can have both.

Lie: I’m not qualified enough to succeed
Truth: Telling yourself this will stunt innovation. You can do something if you put your mind to it.

Inspired by the topic of lies, Singh is writing a book on the topic. If you’d like to hear more visit this link.

Don’t miss out on the next fastBREAK on August 24. It’s a great way to start your Friday morning.

About our Ambassador // This article was contributed by Community Ambassador Fleur Fletcher. She is a marketer passionate in start-ups and compelling content. You can connect with Fleur through Twitter @fleurfletcher.