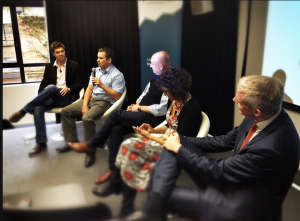 During Social Media Week in London, I was lucky enough to attend a brilliant panel called “The Sharing Economy: Commercial Reality Throw Down”. It was hosted by The People Who Share at Google Campus.

Google Campus was a brilliant place to host such a panel, as there were several Campus-based startup founders in       the audience who were building sharing platforms themselves.

The event focused on “the sharing economy” and how access to physical things, not ownership, was slowly becoming more important to all generations (not just millennials). The panel also discussed how to make access of these items easier through the use of technology and social networking.
So why is the sharing economy so important, you may ask?

Firstly, population growth and a slow economy means that we actually need more sharing. Sharing means we can all be less wasteful and resource efficient, all while saving money. Need a car? Borrow one or share one by using sites like Zipcar or GoCarShare. Need a place to stay when you’re travelling? Borrow someone else’s apartment or share one with sites like AirBnB and 9flats.

The panel then moved into an important debate. If access is becoming more important than ownership, how do we improve access and access platforms over the next decade and what needs to be done to improve the sharing economy overall?

First, we need to work even more on changing minds and normalising the idea of bartering, sharing, and exchanging. We need to embed the principles of sharing across every sector. The idea of “saving up” for things is already fading amongst millennials, purely due to the poor economic conditions worldwide, which means the mindset of the prime consumer is also changing. The panel believes (and so do I), that in entrepreneurial societies, sharing is going to be first thing you do when you need something, not the last thing you do when you’re desperate, not just due to ideology, but due to money.

They discussed that our government needs to remove bureaucracies which make it harder to share. Sharing needs to become even easier it’s going to become dominant.

But the most important aspect of improving sharing? Creating a network of trust to make the idea of sharing even more appealing to people.

Social Media is currently giving us access, but it’s going to become absolutely crucial to normalising these sharing principles and platforms into the mainstream. People are going to rely on a trustworthy online profile to help them choose whether or not to take a leap of faith. Social media isn’t just about connecting with strangers, it’s about getting to know the people around you and creating a stronger community by sharing.
Here here!

Amanda Foley is a Community Ambassador for London. She is a Freelance Social Media and Community Manager for Tech Startups and you can find her on twitter here: @_AmandaFoley