This week The Fetch London’s Curator, Chloe Nicholls, interviews Andreea Magdalina, a Community Manager & Social Media Specialist. Andreea is the latest member to join the team as our community ambassador! 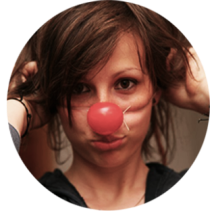 Tell us a little bit about your background and how you came to live in London?

Two weeks into the UCAS deadline I decided to leave Romania for the more promising lands of Britain, after having spent a good few months preparing myself for a career in law. Choosing Media Communications for a degree was partly serendipitous, partly based on the fact that I’m a people person. Good writing skills didn’t hurt either.

Is there much of tech scene in Romania?

Oh yes, there’s more to Romania than horse carts and vampires. In fact, the tech scene there is highly developed and famous startups hungry for talent are scouting Romania for the next Tim Cook. Plus, there is a very engaged entrepreneurial spirit springing from Bucharest as well with communities such as Bucharest Hubb, the first to ever bring these people together, the more recent franchise The Hub Bucharest, Startup Weekend Romania which takes place in a couple of weeks plus much more. Plenty of Romanians went on founding very successful tech businesses too: Summify (recently acquired by Twitter), Brainient (based in London, video advertising), eRepublik (gaming), UberVu (social media marketing), Redutti (the Romanian Groupon) and lots more.

As a community manager, what do you think are some of the myths about your role and what has been your biggest challenge to date?

The most popular myth about Community Managers is that their job is to be on Facebook and Twitter all day long. While it’s true you may have to do a bit of customer service here and there, there’s a lot more strategic planning involved. The biggest challenge I have and am still facing is dealing with negative feedback – you can’t make everybody happy but as a Community Manager my role is to tone that down to zero.

You have a strong background in music and tech, do you have any hot tips for any up and coming music startups?

Looking at how fast things are moving, my only fear is that they get distracted. As long as music people do what they do for the love of it, they’ll stand a chance of survival in the music tech scene. Belief in your product, as well as a strong understanding of your audience are they key to success for any startup.

What are some of your favourite eNewsletters you subscribe to (apart from The Fetch of course!)?

I keep complaining about flooding emails every day but to be honest I don’t know what I’d do with a zero inbox. It’s a total delight to read emails from Swissmiss, Seth Godin, PSFK and others for my marketing and design inspiration plus a bunch of entrepreneurs who blog, such as Andrew Chen, as well as community management tips from Feverbee.

Where do you like to hang out in London?

I’ve been working in Angel for over a year now and I absolutely love it. Just up the road from Silicon Roundabout, it’s buzzing with creatives on their bikes and good places to eat and drink but still close enough to the madness in East London when I’m in a party mood.

Do you think being a ‘women in tech’ means that you have to code?

Absolutely not, although it doesn’t hurt to know the basics. I’m learning code as we speak and it’s quite a lengthy process which I’m not sure I’ll ever master to a ‘fluent’ level but ever since I found out how websites work I’m much better at my job and get a lot more ideas that I can implement using soft skills only.

Finally, what’s next for you?

I’m currently switching jobs, part-time postgrad student, doing a few projects on the side and planning a trip to the US. I look forward to plunging into the tech music scene with the guys at Mixcloud, they are a great team and the industry is hot hot hot with lots of development and new models to be explored. Planning to change the way people consume music!