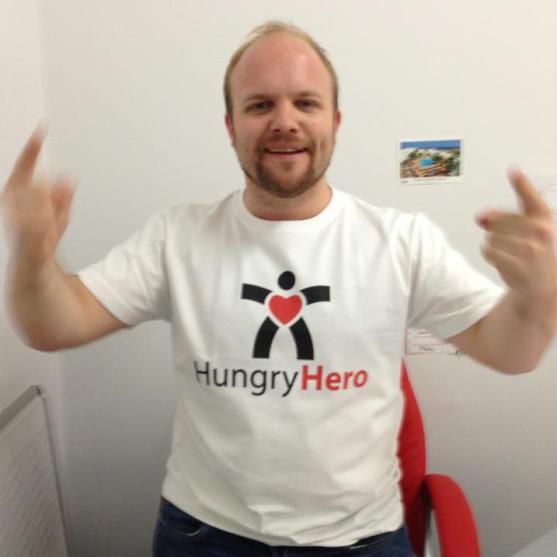 Sarina Quinlan from The Fetch Brisbane recently caught up with Chris Kettle in the UK, where he is about to launch Hungry Hero to the masses.

What do you think of the Brisbane startup scene?

There are great ideas in Brisbane and around Australia, but what I’ve seen is that people are too scared to try to get the money and then they’re really poor at presenting.

Get on YouTube, check out all the Disrupt, TechCrunch ones, to watch how they present and you can get a really nice pitch out of that. Everything you want is online. Go and get it.

Seth Godin’s Startup School is the best podcast on the planet. It’s free, there’s about 17 episodes and if you aren’t prepared to listen to that, then shut your startup down.

What is your advice for entrepreneurs – especially in Brisbane?

I’m a big believer in not starting until you’ve got the funding to do it. I started my first business with my credit card, and don’t necessarily recommend that – what’s nice is that you can get your minimum viable product out cheaper than ever.

How did you secure investment?

I already had an existing business, which has always brought decent cash flow, but for Hungry Hero I wanted to raise funds again to do it properly. Hungry Hero’s a transactional model, which gets users to pay and so again we looked at high network individuals and that’s what we looked for in Brisbane. They’re not going to find you. So I got out there, used my contacts and found an investor and we were able match their funds with Commercialisation Australia. For proof of concept, it’s fifty-fifty funding. Their mandate is to keep jobs in the country. That means if you’re looking at outsourcing to India, like we were in the early days, then they help you to do it in-house. It’s a fantastic program to get funds – although you have to get funds first to be able to match it.

There’s lots of similar things with discounts and offers, but what we’ve done is allowed the venue to have complete control. So instead of giving everyone a $10 lunch, they can use it as a filter. Venues have full control to add it to only customers that have been there before, or within a one kilometer radius. It’s sort of like giving the power to the venues to contact customers who are looking for somewhere to go.

How many people are using the app?

We’ve been into six figures for a while now and if we can get to a million before Christmas in Australia would blast our goal for this year. We’ve seen downloads across the world too. We have a nice little campaign feature on the app that in any city which they download it, they can tweet “Bring HungryHero to our city”, we’ve had people from Vancouver to Singapore, across Europe and Asia tweeting out to get HungryHero in their country. Now we have our version one model working in Australia, next, is how to scale this around the world without having to be there.

What motivated you to develop Hungry Hero?

The app was born out of the debacle of the group buying space. There was a lot of wrestling to run deals on living, social and Groupon. Businesses are giving up to $50 commission on these offers and it was costing them more than it was making them. There was a lot of false promises there, and it was a case of “how can we make a platform which allowed thousands of restaurants to add deals at any one time, and the restaurant is in full control.” That’s how the idea was born.

How does it work for customers?

There are a few different types of business models. If it’s and exclusive offer, a customer can simply pay a dollar to secure it. We’re just about to bring out Gold Memberships, which means you can buy a monthly membership that allows to access unlimited offers and exclusive offers. Gold membership will be five dollars a month. We think customers prefer to pay their memberships monthly. It will pay for itself instantly with a 2-for-1 lunch, or a free bottle of wine with dinner.

How many venues can be accessed from the app?

We have almost 600 venues across six major cities. Most of them are restaurants, but there are also entertainment venues, comedy theaters; it’s all about eating and drinking and going out.

We’re very excited because we’ve just been one of the featured apps for Samsung for the new  Samsung Wallet. When you make a booking or secure a deal, you can add it into your Wallet  so that when you show up at the restaurant you just show them your phone. People want to have all these tickets and coupons easily accessible, and so that will be rolling out to eight million units in Australia.

Tell us more about the Samsung Wallet connection.

We’re one of the official launch partners. So it’s a link in Samsung wallet, which gives us exposure. There’s some really great opportunities working with Samsung and Apple, and I’d recommend any entrepreneur to be looking for them. That’s why I think we can get to a million users by Christmas. With these opportunities, we’re now looking at overseas markets and taking Hungry Hero to the UK and US.

Why have you decided to visit Germany, UK and the US?

Even though I’m a big believer that you can run your global business from Brisbane, there’s nothing like having your foot on the ground and seeing how the culture works. Every area is different, with location based deals. In Brisbane, when it’s wet, people don’t go out. Whereas in London when it’s wet, people don’t have a choice. So there’s different cultures and opportunities. So I’m going to go out there, put the feelers out, and see if we can build on the relationships we’ve got already.

About our contributor // Sarina Quinlan is a marketing consultant and the curator of The Fetch in Brisbane. Follow her on Twitter via @digitalsarina.