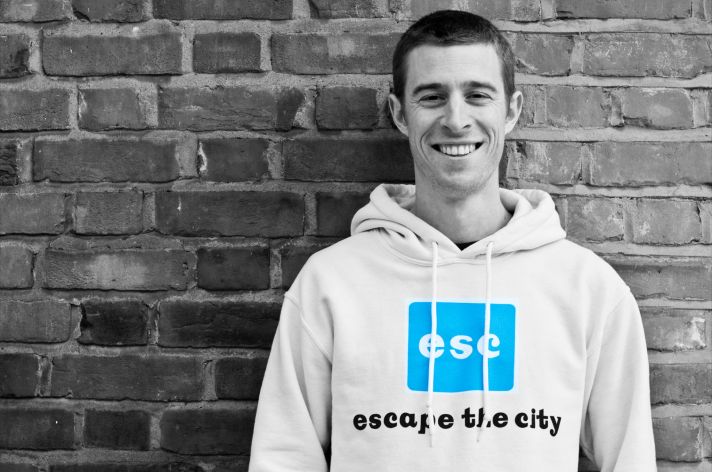 “Too many startups chase quick success and funding. I think ideas and teams need to gestate… It takes guts to think long-term.”

Louise Potter catches up with Rob Symington, co-founder of Escape the City.

What inspired you to create Escape the City?

I met my co-founder, Dom Jackman, when we were both working as management consultants in “the City” – London’s financial heartland. We were inspired by our own frustrations with the corporate career ladder – too much meaningless work all aimed at a one-dimensional pursuit of profit. Bored and ambitious, we wanted to spend our careers working on things that mattered to us. When we realised that we were far from the only people to feel this way, we decided to start a community for all the other people who aspired to build careers outside the corporate mainstream.

How is it positioned differently from other careers sites?

Whereas most career sites align to a sector (ie. tech) or a skillset (ie. developers), we align to an emotion – namely that feeling that life is too short to do work that doesn’t matter to you. We’re also a community first and a business second. Our bible is Tribes by Seth Godin. We didn’t invent this emotion, we simply chose to put a flag in the sand for anyone who feels the same way. Fortunately for us, many people do, and over 140,000 people have joined Escape the City in pursuit of careers that matter (to them and the world).

Startup life is a long way from the city. What’s been the biggest adjustment to make from leaving the corporate world?

The buck stops with you in a startup. In the corporate world you can almost always count on someone else being ultimately accountable for a problem. The other adjustment, which is a positive one, is that we’re massively more productive working in a startup. In the corporate world there was so much work for work’s sake. Now everything we do (and we do a lot of work) is directly aligned to achieving our goals.

You crowdfunded £600,000 to build Escape the City – were you happy with this approach in hindsight?

Absolutely. We had a real head vs. heart decision to make when we turned down one of London’s top VCs to raise investment from our own members. No regrets at all. Escape’s brand stands for rejecting the mainstream and doing things differently. It would have been pretty rich if we’d gone straight back to the corporate world for our funding.

If you had to pick a job that’s been featured what would it be?

I have always loved working and travelling in Africa. One of the very first jobs we listed on Escape was for a project manager to work with the Rwandan government to setup a careers service for Rwandan graduates. It’s a job I would have loved to do. Esc was still just a side-project at that point and I remember my business partner, Dom, jokingly warning me against applying for the first opportunity that came across our radars! Almost five years on and I’m glad I didn’t.

What’s the best thing about working in London?

There is so much opportunity in London. There are so many people and there is so much positive energy. We could never have launched Esc I the way that we did in a smaller city.

What other startups are doing work that you admire – and why?

I love what the guys at Maptia are building. Straight out of uni and coding their platform themselves. They have been brave enough to take the long route to build a business that they control 100% in pursuit of a big, long-term vision. They lived in Morocco for a year to keep costs down.

Too many startups chase quick success and funding. I think ideas and teams need to gestate. The great thing about the internet is that it has massively democratised entrepreneurship.However this also means that as first-time founders, we often don’t know what we’re doing in the early days, so keeping our business alive long enough to learn important lessons is really important. It takes guts to think long-term.

Who would be your perfect boss?

Seth Godin. Or Eric Cantona. They’re both artists and they’re both brave enough to be different. In a world of uniformity that can’t be underestimated. I think the best bosses find talented people who share their values and then trust them to solve difficult challenges.

Where do you escape to?

I live on a narrowboat with my fiancé and a cat called Jack who thinks he is a pirate. We don’t have a TV and we don’t have wifi. So when I’m at home I’m (for the most part) unplugged. Living as we do, constantly connected, we’re all overstimulated. I find it’s really important to be present and be still and reconnect with my immediate surroundings whenever I can.

What updates can we look for next on Escape the City?

I’m currently on the look out for a permanent venue for The Escape School in London. The Escape School is our education arm where we produce talks and courses on the subjects of unconventional careers, startups and adventure. Watch this space!

About our writer // Louise Potter is the curator of The Fetch London. She also writes things Contagious and teaches things at General Assembly. Follow her via @louisepotter_.