The 8 most important tools for building community

Crafting a strong community takes the right balance of talking to your audience and actually listening them. Sarah Judd Welch explains the key tools for cultivation. Yes, content is one of them.

END_OF_DOCUMENT_TOKEN_TO_BE_REPLACED

How Threadless, The Huffington Post and Fitocracy understand the business value of community

Do you understand the business value of community? Sarah Judd Welch of Loyal provides some solid examples from Threadless, The Huffington Post and Fitocracy…

Over the past few years, I’ve seen and felt first hand the skepticism of business leaders and traditional marketing folks around the financial return on investing in community initiatives. While it used to be that most of the evidence was anecdotal, today there are quite a few examples of community efforts moving the bottom line among the biggest and smallest of brands.

Let’s keep in mind the goals of community when talking about return: connect people to each other, make them happy, and make them stay (retention). All three of these goals strongly correlate with brand loyalty, referrals, and engagement metrics. With these in mind, consider the following statistics: 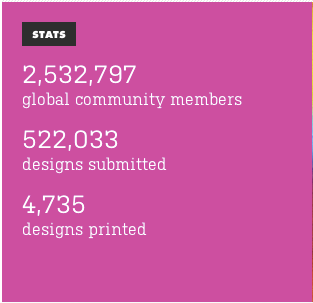 Although these stats are impressive, nothing demonstrates a point quite like real-life examples. Take Threadless – a creative community created by skinnyCorp that makes, supports, and buys great art – the perfect model of crowdsourcing and customer community success. At Threadless, e-commerce and community intersect; members submit designs (originally t-shirts, and now other stuff) that fellow members can purchase. Founded in 2000 with just $1000, the community has now grown to 2.5 million members globally with more than 500,000 designs submitted and nearly 5000 designs printed. Together, Threadless members have helped raise nearly $8.8 million for more than 1200 artists worldwide. How’s that for ROI on community?

Likewise, The Huffington Post, arguably the largest actively managed community on the internet, also benefits as a media company from strong community investment. HuffPo leverages its commenter community to distribute content and drive new and returning visits to the site with roughly 9.5 million pre-moderated comments per month. As a content trendsetter, the media powerhouse has sought to ensure a safe place for people to comment, according to its previous Director of Community, Justin Isaf. While the company does use an algorithm to help moderate spammy or inappropriate comments, the community is largely self-policed, reducing the need for headcount on HuffPo’s community moderation team. Partially as a result of its community, HuffPo sees 70M unique visitors and 1.1B pageviews in the US. alone. The results are clear: community engagement and distribution means more site views and unique visitors, a major selling point for advertisers and content sponsors.

Like Threadless, Fitocracy is a community platform. The fitness gamification network is built around a community of people motivating each other to get healthy everyday. The network has grown from 300,000 to more than 1.5 million users since it launched out of beta in March 2012 and has more user engagement than Twitter. According to founder Dick Talens, users come back to the app seven days a week even if they’re not working out – just because they’re so engrossed in the community. The app has also found a new way to monetize community with group fitness plans built around two of the most valuable benefits of any community – accountability and support among members. Aiming to replace the typical “gym trainer model,” the group fitness plans assign small groups of Fitocracy community members to one trainer for a fraction of what training would cost at a gym (plans are $50-77/month). The groups are held accountable to report their progress to the trainer and to each other through communication systems such as Google Hangouts and Q&As. Fitocracy has effectively monetized their community itself.

These examples show that community really can have a significant (and positive) impact on your bottom line, whether it’s through retention, increased engagement, referrals, or a revenue stream built around fulfilling the needs of an existing community. You’re most likely already interacting with your users, and many of them are likely already interacting with each other. Challenge yourself to reorganize the structure of these touch points to form a community that will contribute to your bottom line. Are you leveraging the value of community?

About our contributor // Sarah is the founder and Head of Community Design + BD at Loyal where she designs communities for startups, brands, and Fortune 100s. Find her at @sjw.